Bandung – On Monday (10/10/22), the Faculty of Mechanical and Aerospace Engineering (FMAE) ITB welcomed the visit of the South Korean Ambassador and his entourage. This meeting was regarding the progress of the bilateral collaboration between the Republic of Indonesia, through ITB, and the Republic of Korea. The collaborations discussed were the Machine Tools Industry Development Center (MTIDC Project) and the Marine Technology Cooperation Research Center (MTCRC).

Remarks started this meeting from both parties. They are the Dean of FMAE, Prof. Dr. Ir. Tatacipta Dirgantara, and the South Korean Embassy Ambassador for ASEAN, H.E. Kwon Hee-Seog. 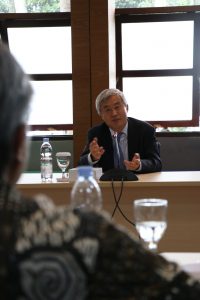 The opening remarks from the South Korean Embassy Ambassador for ASEAN

The meeting continued with a presentation regarding the MTIDC Project. The idea of the MTIDC project was initiated by the Ministry of Industry of the Republic of Indonesia and FMAE ITB. MTIDC project aims to support the national machine tool and medical device industry to grow and develop faster.

In this collaboration, the government of the Republic of Korea gave a grant aid of 70 billion rupiahs in the form of machine tools, such as general machine lathes, CNC machines, AR/VR equipment, machining equipment, and others. The placement of the expert with some workshops in order to increase the capacity of human resources was also carried out in the context of strengthening the MTIDC Project. Some machine tools and equipment grants have been used and produced components of substitute goods such as electrical boxes. Furthermore, the roadmap of the MTIDC Project from 2022 to 2026 was also explained at this meeting.

The next discussion was about the Marine Technology Cooperation Research Center (MTCRC). MTCRC is a collaboration between the Korean and Indonesian governments in marine research. The Faculty of Earth Sciences and Technology (FITB ITB) is responsible for this collaboration. During the three years of collaboration, MTCRC has owned boat facilities and hydro-oceanographic survey equipment located at the ITB Cirebon Campus.

The meeting continued with discussions between the two parties. Before visiting the Center of the Development of Technology Industry (CDTI) building, they took a group photo, and FMAE gave a memento to the South Korean Ambassador for ASEAN. From this meeting, both parties hoped that the good collaboration between Indonesia and Korea could continue for the sake of building the nation’s civilization based on a strong friendship. 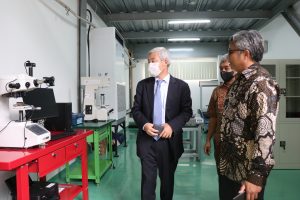