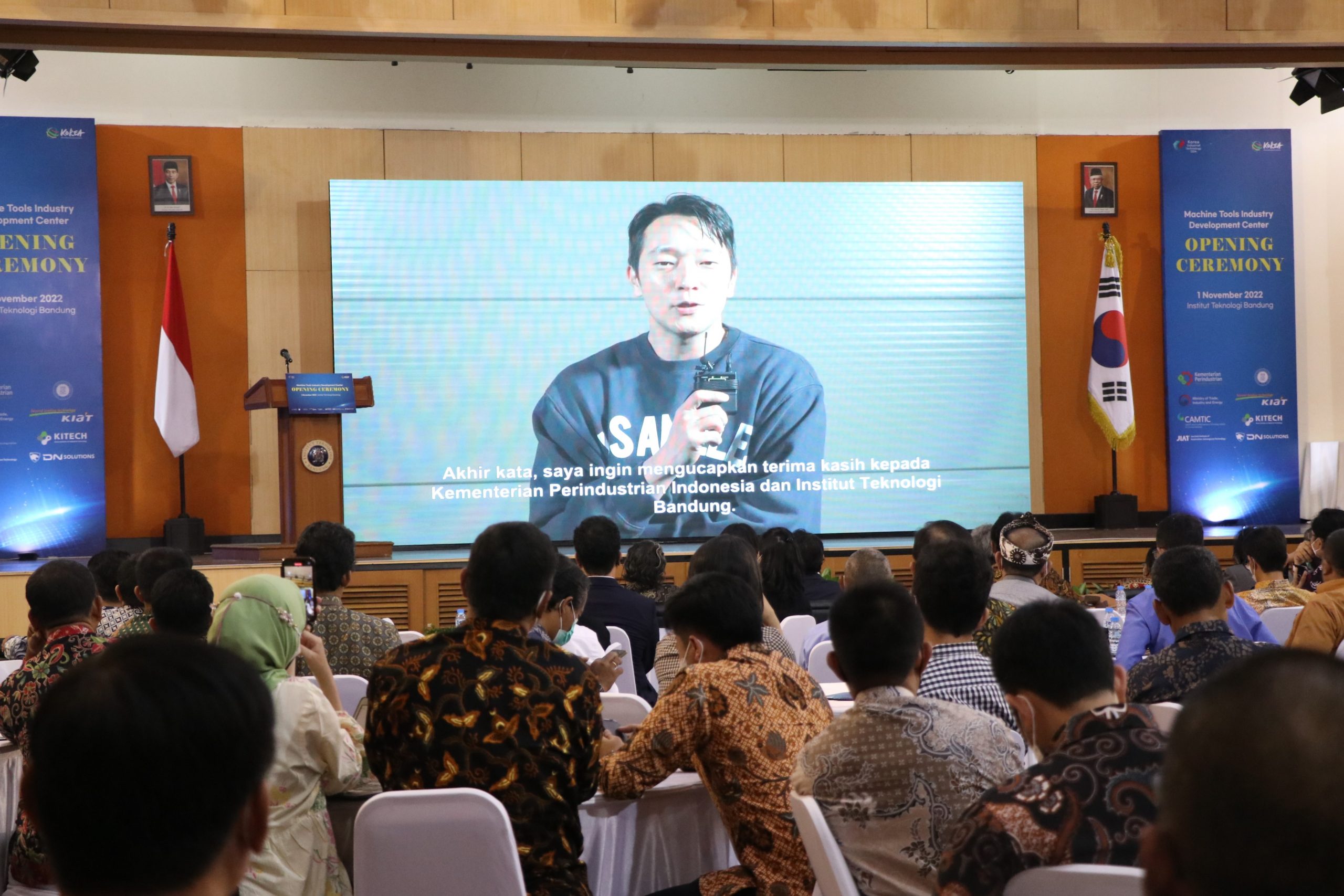 Bandung – Tuesday (01/11/22), the Faculty of Mechanical and Aerospace Engineering (FMAE) held a handover of a Machine Tools Industry Development Centre (MTIDC) project in CRCS Building, ITB Ganesha. As a bilateral collaboration between Indonesia and South Korea, this event was attended by many consortiums of the Republic of Korea, such as the Director of Korea Institute for Advancement of Technology (KIAT), the Director of Advance Mechatronics Technology Institute for Commercialization (CAMTIC), and others. The Secretary of the Directorate General of Metal, Machinery, Transportation Equipment, and Electronic Industries of The Ministry of Industry of The Republic of Indonesia and some other guests attended this event as the representative of Indonesia. The ITB Rector, the Dean of FMAE, and some other lecturers also participated in this special event.

The event was opened with remarks from the Rector of ITB, Prof. Reini Wirahadikusumah, Ph.D. Then it continued by the Minister of Industry of the Republic of Indonesia, Mr. Taufiek Bawazier, who attended virtually to deliver his brief general speech.

Son Soek-Koo, a famous South Korean actor, was the CEO of GOMT and delivered his brief general speech via a video record. A general lathe, as one of the grant aid given by the Republik of Korea through the MTIDC project, is a general lathe produced by the GOMT Company.

In his brief general speech, he congratulated the opening of the center for developing the machine tools and technology industry in Indonesia. He was also pleased to hear that the GOMT manual lathe model NARA 430 would be assembled and produced locally through technology transfer which would then be distributed throughout Indonesia, including companies, institutions, and schools. He also hopes that GOMT can provide the best support so the project can be completed successfully. Furthermore, he also expressed his gratitude to the Ministry of Industry of the Republic of Indonesia and Institut Teknologi Bandung.

The Director of KIAT as the general manager of this project, Mr. Park, hoped that Indonesia and South Korea could be two countries that the world relies on for the production of industrial technology through the MTIDC project.

“Next year is the 50th anniversary of the friendship between Indonesia and South Korea. The MTIDC Project will continue, and the two countries will always live side by side, ” said Mr. Park in his remarks.

He also congratulated the two countries’ success in the long collaboration of the MTIDC project. He also expressed his most profound gratitude for the Ganesa Wirya Jasa Adiutama award given by ITB for KIAT.

After the MTIDC project is officially handed over, FMAE has now become part of the center for the development of the technology industry in Indonesia. Let’s support the localization of machine tools in Indonesia!