The availability of clean water is still one of the challenges faced by the wider community of our country, especially those in remote coastal areas. The process of meeting the need for clean water is still very dependent on groundwater sources, which are not always available. Desalination is the process of separating salt from seawater to produce fresh water. This process is often used by areas that face freshwater shortages, but have access to seawater. Reverse osmosis, multi-stage flash distillation, and multi-effect distillation are some examples of widely used desalination technologies. However, these desalination methods use high technology that is most commonly powered by fossil fuels. Hence, what if desalination is needed in remote areas of our country? Are there any other desalination technologies that do not require fossil fuels, but utilize the abundant solar energy that our country has?

Solar distillation is a desalination process that utilizes energy from the sun. This process mimics the naturally occurring desalination process called the hydrological cycle. When seawater evaporates, the vapor leaves behind mineral salts. The water vapor eventually rises due to buoyancy and is then condensed and collected as a source of fresh water. Just like the hydrological cycle, water desalination in solar distillation goes through the same process steps, and the devices that use this process are called solar stills.

To help communities in remote coastal areas that lack access to clean freshwater, FTMD ITB has developed a floating solar still prototype. The prototype was made using cheap and widely available materials so that the people in remote areas can make their own solar still by utilizing local materials. The design is made of polystyrene foam, towel cloth, and polyvinyl plastic sheets, materials that are widely available at a relatively low price. 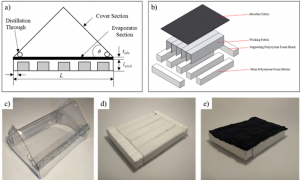 The results of this research, which have been published in the journal Results in Engineering with the title ‘Low-cost floating solar still for developing countries: Prototyping and heat-mass transfer analysis’, are different from conventional solar still designs. The prototype solar still being developed uses a floating structure. The structure is intended to increase the thermal efficiency of water evaporation, by localizing the sun’s heat to a single surface layer of black cloth used as the evaporator. The polystyrene foam, which is located under the black cloth, serves as a buoyant structure and a heat insulator to minimize heat losses and help localize heat to the evaporator. The heat concentrated on the surface of the black cloth is then used to evaporate the water which is absorbed from under the floating structure by the towel cloth utilizing capillary force. The vapor that has been formed then rises upward until it condenses on a cover and forms water droplets which are then collected as freshwater.

“Initial testing of this prototype showed very promising results. The surface temperature of the evaporator can reach up to 59.5 oC, 24 oC higher than the temperature of the water below, even though the test was carried out on a cloudy day,” said Faiz Akbar Raihananda, a member of the research team. It was further explained that this was the result of the prototype’s heat localization capability.

To guide the design process and optimize the performance of this prototype, the FTMD ITB research team also developed a heat and mass transfer model for this prototype. “The results of the measurements and simulations are quite close, so we think that the developed model is quite accurate and can be used to guide the next iteration process,” said Evan Philander, who was also involved in this research.

Although the testing results of this early prototype are very promising, Poetro Sambegoro as the head of the research team admits that further research is still needed to improve the efficiency and reliability of this prototype before it can be applied for the use of the wider community. “For the next step, the team will conduct field testing in eastern Indonesia, where the intensity of sunlight is high while freshwater sources are still lacking. Hopefully, it can help the community.”

The development of this prototype was supported by the FTMD ITB P2MI Program as one of FTMD ITB’s commitments to contribute to solving problems faced by the broader community.