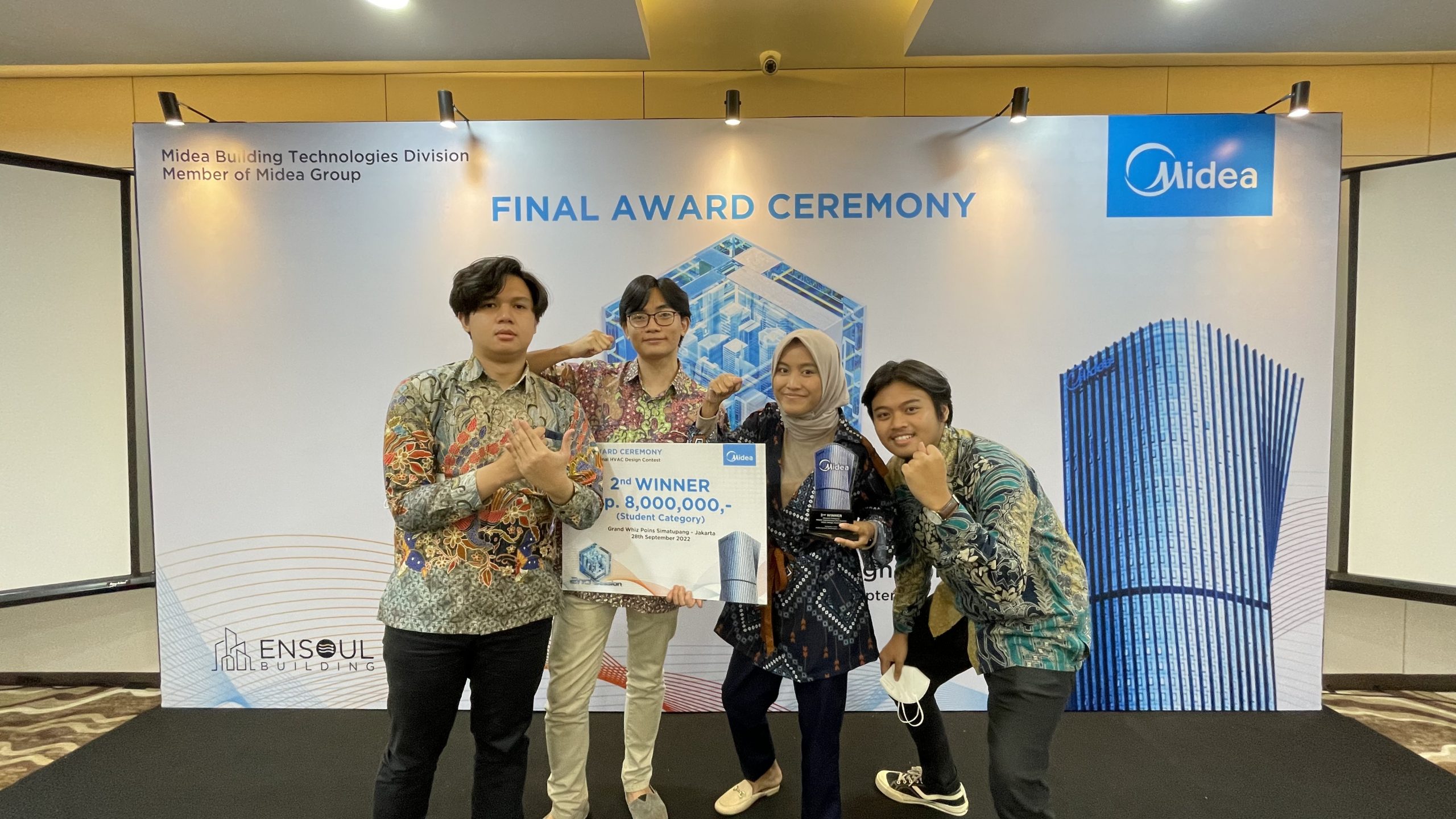 Bandung – Midea 2nd International HVAC Design Contest is a competition held by Midea Building Technologies in 6 countries; Vietnam, Malaysia, Philippines, Indonesia, UAE, and Georgia. This design competition has been going on for 20 years, starting in 2002. This year, Indonesia had the opportunity to host the Midea 2nd International HVAC Design Contest.

There are two types of competition categories; Student Category and Professional Category. The first stage for every category was the national-level selection. The 1st, 2nd, and 3rd place winners per category from each country would compete again in the international areas. They competed as a representative of their own country.

In Indonesia, seven teams from various universities participated in the student category.

The team who brought the trophy for FMAE consisted of five people from different institutions. Four of them are ITB’s Mechanical Engineering students. They are M. Kahfi Habibie, Muhammad Rayhan Nur Haq, Anthony Mika Tjahya Indra, and Laila Nur Azizah. As well as another person, Abdillah Nanda Ramadhani is a student at the Department of Architecture at Yogyakarta Amikom University.

The first stage was collecting the administrative files and papers by the participants. They had a one-month deadline to complete the case studies given by the organizers.

After receiving a case study from the organizer, the team immediately divided the tasks. Rayhan and Kahfi were responsible for studying the TRACE 700 and ASHRAE Handbook applications which were used in calculating cooling loads using the CLTD (Cooling Load Temperature Difference) and CLF (Cooling Load Factor) methods. Laila and Anthony were in charge of studying the existing air conditioning systems. They also had to consider choosing the best air conditioning system for a particular case. They also need to understand Midea’s catalog to make a system selection when the maximum number of cooling load results are obtained. Because the organizers only provided the design in 2D drawings (Construction Plan) to place the air conditioning system when it was determined. Nanda made a 3D design of the building that the organizers had specified.

During writing the paper, many parties were involved. As a supervisor, Prof. Ir. Ari Darmawan Pasek, Ph.D., helped them a lot in the theoretical field, especially in refrigeration. He was chosen as a supervisor because none of the four had ever taken a course in the refrigeration field, and they considered his research topic to be in the refrigeration and air conditioning field. Besides that, Prof. Ari advised them to consult with students who were taking their final project regarding calculating the cooling load with the TRACE 700 application to assist them in using it. In this case, they were assisted by Vito, ITB’s Mechanical Engineering students class of 2017, and Bayu and Imam, ITB’s Mechanical Engineering class of 2018.

Not only in terms of theory, but they also received practitioner guidance from a professional by Mr. Bintang Saputra SST. from CV Bikarya Multi, who gave many practical directions.

They proposed designing an air conditioning system for a 10-storey hotel with certain specifications. They carried out the theme of green and sustainable building, prioritizing energy efficiency and renewable energy.

After sending the paper and some required documents, the national judges assessed the files to be selected for the final round called presentation. From the selection of the two files, only two teams were considered appropriate to proceed to the presentation round. It was because the committee considered that the other teams needed to meet the standards of MBT (Midea Building Technologies).

The FMAE’s team is one of the two qualified for the next stage. On September 28, 2022, they traveled to Jakarta to conduct an offline presentation in front of the judges. The judges are ASHRAE Indonesia.

One day before the presentation, the team practiced having a presentation with Prof. Ari to get feedback for the final presentation.

Since every hard work pays off, this team succeeded in 2nd place at the national level. Then, they competed again as Indonesia’s representative and awarded the Design Expert Award at the international level.